Around 20% of professional cyclists will eventually develop a sport-retated vascular problem in the iliac region. An estimation of 5% of the recreational cyclists are at risk to develop such abnormality. In Holland, this is near 75.000 cyclists! A lot of cyclists have such pathology, but are unaware of this. If not diagnosed at an early stage, it is believed that they do not have the talent nor the physical condition and consider to stop performing sports at a high level. But, the problem might be solvable!

dr. Goof Schep, sports doctor at the Maxima Medical Center, is the Dutch specialist in this area.

The cause of vascular problems in cyclists is mainly the millions of hip flexions in an earodynamic position. For this reason, the problem also occurs in speed skaters and triathletes. A bent hip angle ensures that, with an unfavorable anatomical location of the iliac artery, the leg arteries can kink during cycling. Excessive muscle development deep in the groin can also cause a narrowing. When every pedal rotation leads to a kink, that amounts to about 8 million kinks per year for a professional cyclist. The more kilometers you cycle, the greater the risk of a vascular problem.

That amount of kinks eventually causes damage to the iliac artery. In addition, a kink in a strenuous exercise can lead to problems in the blood supply. A professional cyclist has to pump about 12 to 15 liters of blood per minute through both iliac arteries while cycling. If this is not successful, this leads to a shortage of oxygen in the leg muscles and again to faster acidification.

Risks of the athlete with a vascular problem

If you continue to exercise for longer, the scarring / narrowing of the artery wall can increase. In the worst case, this can lead to an acute occlusion of the blood vessel. An earlier study (Bender et al. 2004) showed that 40% of the patients examined in that study already had so many abnormalities in the blood vessel at the time of diagnosis, making less invasive surgery possible for them.

It is therefore essential that the condition is detected in time.

The diagnosis (or analysis) concerns a range of investigations. If an athlete with a suspected vascular problem presented him/herself at Dr. Schep, there will first be a telephone intake interview. If the complaints indicate a possible compression of the iliac artery, then a decision is made for further investigation.

This investigation (possibly) consists of the following parts:

Ultrasound can be used to view the vessels in both a stretched and flexed position. The flow rate of the blood and the diameter of the arteries can also be determined.

After the ultrasound scan, a bicycle maximum test with pedal force measurement follows. Immediately after this test, a blood pressure measurement is also taken in the legs. 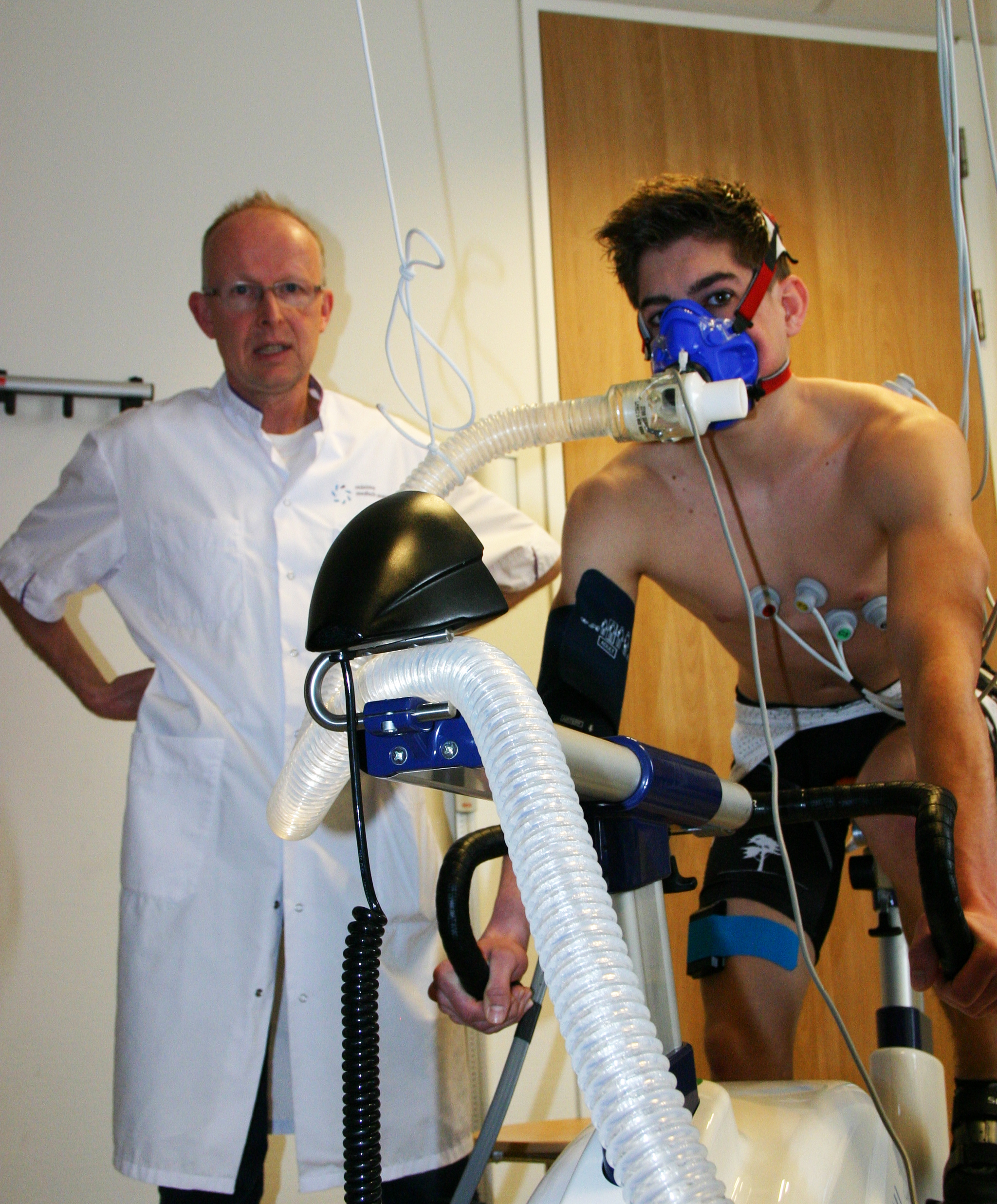 Blood pressure measurements in the legs

NIRS stands for Near-infrared spectroscopy. This technique means that during the cycling test a measuring device is placed on the outer thigh muscle (vastus lateralis) which measures whether there is a reduced blood flow to the muscle. By means of bluetooth, the results are sent directly to a laptop on which the results can be read. 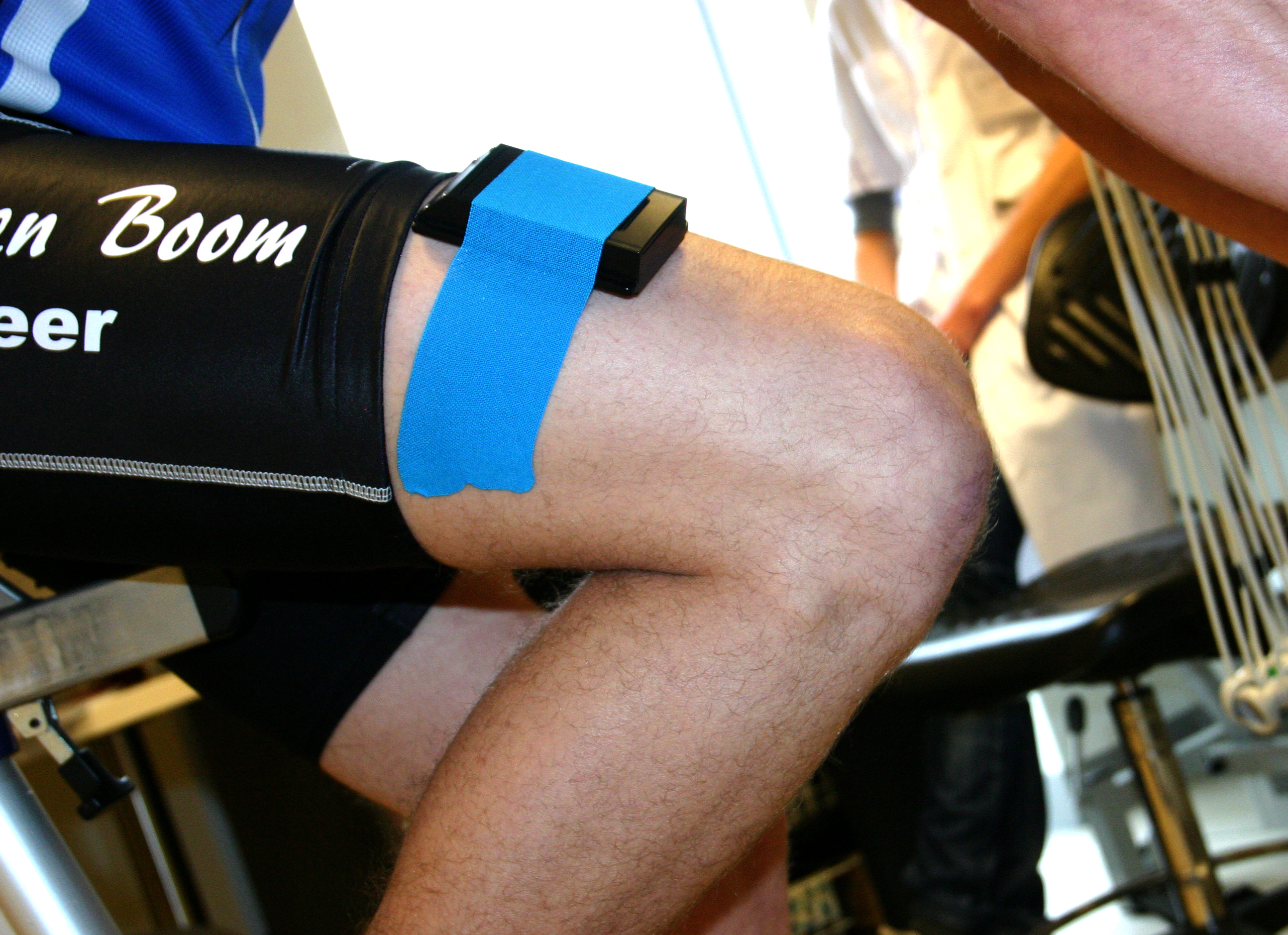 In a healthy leg, the oxygen content will decrease during exercise and immediately recover after the effort is stopped, but in persons with a vascular problem a markedly delayed recovery of the oxygen content is observed. This has to do with the reduced blood flow as a result of the narrowing in the artery. 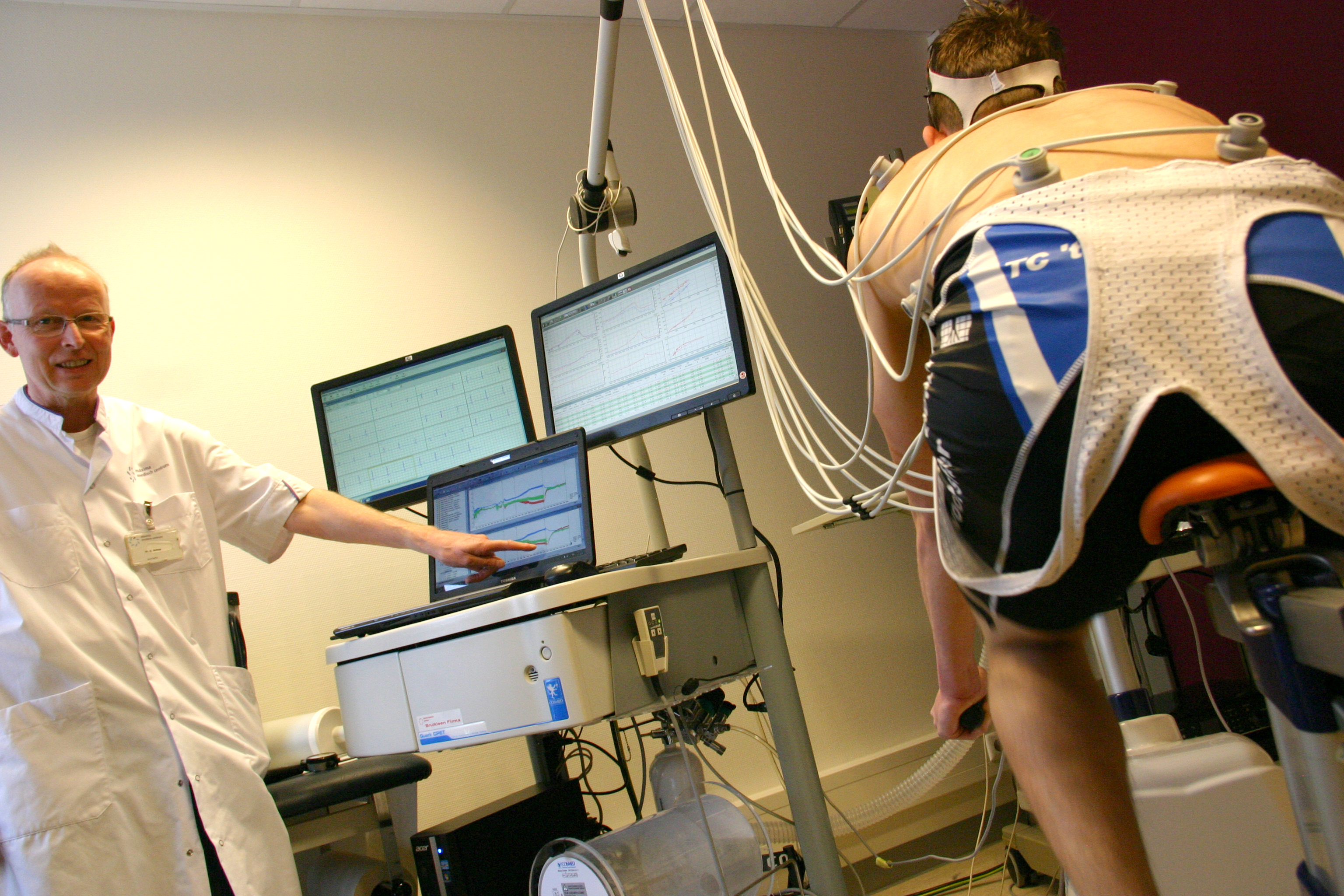 Magnetic Resonance Angiography (MRA) is used to visualize vascular abnormalities in detail and is only used when surgery is being considered. During the scan, the patient should lie in a position with the hip bent, as this is the position in which the abnormalities can best be seen; in some patients the kink is not visible until the hip is bent. The MRA can also visualize the length of the arteries. With these properties, it is an important tool for mapping out the precise nature and location of abnormalities, so that it can subsequently be determined what kind of surgery needs to be performed. 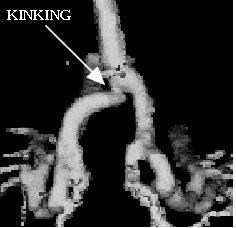 With the help of these examinations, it can be determined what form the injury has and what the correct treatment method is.

There are several options available for the treatment of a vascular problem in the iliac arteries, depending on the nature of the abnormalities. A doctor will not only look at the seriousness of the abnormalities and the technical aspects of a treatment, but also the social and psychological factors (eg motivation) of the athlete himself in order to arrive at an appropriate advice. A professional cyclist will generally not accept the advice to practice another sport because in that case he will become 'unemployed', while a recreational cyclist may rather be satisfied with this.

There is no surgery yet, but an attempt is made to reduce the complaints and prevent aggravation by means of posture and training adjustments.

Advice regarding sports practice for vascular problems are:

In about 70% of these athletes, a decrease in complaints is observed and in many cases patients are even symptom-free after 5 years. In some cases, surgical treatment should be considered at a later date.

If abnormalities of the iliac artery are too obvious and too large, it is decided to surgically release those abnormalities (fixations) from the underlying (muscle) tissue. This intervention can be done in an early stage of the disease --> if too much damage to the vessel wall has not yet been observed. If this is the case, a vascular reconstruction can take place. This means that not only is the artery detached, but a portion of the artery is also replaced or a portion is removed to prevent excessive lengthening of the iliac artery. This procedure is very extensive and involves risks. It is therefore always a priority to avoid this treatment.